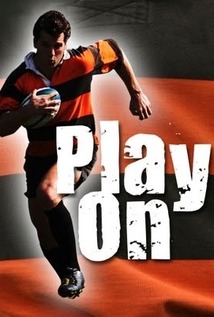 There's the road less traveled. There's the road to redemption. And somewhere in between is a one-way ticket to Kansas City for wayward Scottish rugby star Keir Kilgour.
Even at the highest level, rugby didn't pay players until the mid-1990s; it held on to the amateur ideal longer than any other sport. And now, the greedy but talented Keir and his old-school father, rugby legend Finlay Kilgour, find themselves stranded on opposite sides of that ideal. When Keir’s drive for fame and money collides with his quest for love and respect from his critical father, things get ugly. Following an appalling act of selfishness, Keir flees his rugby background in a delusional pursuit of greater stardom in the high-profile world of professional American football.

When the bubble of his rash, big money dream bursts, Keir -- demoralized, broke, but too proud to return home -- stumbles upon an unlikely group of saviors, the Kansas City Wanderers. A failing second division rugby club, the Wanderers are a motley collection of weekend warriors who are amateurs in the worst sense of the word.

As the Wanderers can attest, everyone does stupid things. But, it's not always what you do that matters. It's what you do next.
Get up. Play on.